If you’re looking to route Audio & MIDI, between your iOS device and MacOS, or Windows, a 2nd iPad, or to other apps on your device, Studiomux is a great utility.  Coupled with Audiobus, which is nicely baked into Studiomux, you’ve got a powerful Audio & MIDI router, allowing you to take full advantage of your production ecosystem.

In this article I’ll show some of the creative ways StudioMux can be utilized to route audio & MIDI. Probably the most challenging aspect of Studiomux is familiarizing yourself with its GUI and functionality – a task made tougher by the Studiomux documentation – which I find tough to read.

If you use Windows for audio production, chances are you’re aware there are particulars that can be system, and O/S dependent. There’s much banter about the merits of one OS over another, but the reality is most producers use w

hat they have available, and there are always more “new” producers, than veterans. You’ll likely have to dig in with your setup. However, there are some excellent supplementary MIDI and Utility tools from Tobias Erichsen at his website, including RTP-MIDI (Windows equivalent to the Mac Network Session for Wi-Fi and Ethernet MIDI Sessions), the ZeroconfBrowser (for enumerating Apple Bonjour Services), and Virtual MIDI which allows you to create Virtual MIDI I/O’s on Windows for applications that don’t enumerate their own MIDI Ports).  If you happen to be, like me, using a mixed Windows/iOS/MacOS/Android setup – all of these tools are handy. They are all (to my knowledge) working great on the newest OSes, and have been utterly stable and latency free for me over the past few years.

To get started with Studiomux – you’ll need to download the Studiomux Server for Windows or MacOS. On MacOS, after you download, install, and run Studiomux, you’re done. The Studiomux installation for MacOS installs its VST & Au’s automatically. On Windows you’ll need to install the 32 or 64 bit VST’s manually to your appropriate folder. The Studiomux icon will display on the taskbar when running. On Windows, clicking the Studiomux taskbar icon also drops down a list of your MIDI I/O’s, allowing you to select which you wish to use. At the bottom of the MIDI list you’ll see the options to install the 32 or 64 bit Studiomux VST’s.

on your iOS device, download Studiomux from the app store, install and open. If you’ve got the Studiomux server running on your computer, you can click on the taskbar icon, and you should see both an Audio & MIDI connection, as shown in this image:

Back on the iPad You’ll now have Studiomux opened up.

You’ll definitely want to make a pit stop at Settings to make sure your Buffer Size is correct. General rule of thumb with iOS is that whichever audio device is loaded first controls the buffer size.  So if you’re connecting up to the desktop, make sure your default audio interface’s buffer size matches Studiomux.

The GUI – Looking at the image to the right, Studiomux is an 8 Channel Mixer. Each of the 8 Lanes Can Send and/or Receive Audio, from external sources, or by listening to the other Lanes. Tap above the Roman Numerals and then tap which Lane(s) you want the selected Lane to listen to.

Monitoring, Soloing, and Muting of all I/O’s and volume levels of each stream can be adjusted by Tapping the Headphone icon and mixer icon.

Tap Settings to save and load presets. I highly recommend this feature, once you get a few setups in place, it does save the aggravation of loading up and routing your audio how you want it. Studiomux presets auto-load all your apps.

Studiomux provides an Internal, Ableton Link, and MIDI (IAA) Sync options. Using IAA Sync, Apps with native support like Elastic Drums can be Triggered from the StudioMux Transport. As the 2nd below image shows, you can adjust the tempo, clock delay, and nudge the tempo up and down. 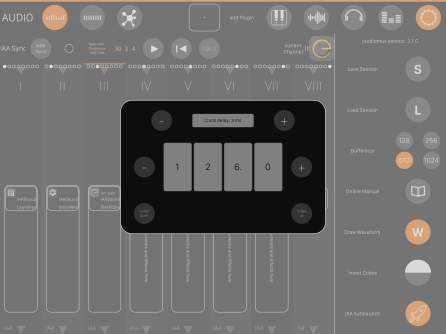 Tapping the MIDI Tab pulls up a list of all your MIDI I/O’s. Sources and Destinations can be toggled Inactive/Active, providing an easy way of setting up MIDI routing. Additionally, tapping the + button allows you to create Virtual MIDI Ports – which will show up as MIDI I/O’s in other apps or external devices, allowing you to route MIDI to apps without proper ports.

StudioMux also can route OSC between supporting apps like TouchOSC, or Parat+. StudioMux functions like an OSC mirror, reflecting its OSC Connectors’ ports.

Highly functional. You can Select either the Keyboard, or Pads to play. Velocity can be Toggled on or off and a Slider allows you to adjust both minimum and maximum velocity values (0-127), adjustable to hundredths. Tapping Dest. allows you to select a MIDI destination. You can select Current Track or any of your available MIDI ports. There are 24 scales available in StudioMux. And you get 16 MIDI pads to play into your StudioMux lane, or any External MIDI Source.

To VST or not to VST

One aspect of StudioMux I found very confusing, was well… how to use it? On the Mac you’ve got VST and AU plugin versions of StudioMux, both Generators (Instruments), and FX. But, if you’ve got StudioMux connected and running, if you open up Audio MIDI Setup on your Mac – you’ll notice you’ve also got a new 18/2 Audio Interface listed. So which to use?

Well, this is really a customization question. I’ve recently been using the 18/2 Audio Interface, rather than the VST’s. If you change your Default Audio Input Device to the 18/2 StudioMux interface, you can then select your Output device of choice. Remember, the 18/2 is somewhat deceptive. It’s actually more like 18/16. To explain – you get 8 Stereo Channels totaling 16, plus a Master Stereo Channel for a total of 18. This can also be confusing, because the Master Channel is always Ch’s 1/2 – So StudioMux’s first Lane (or Mixer Channel) is 3/4. And while the StudioMux Audio Interface lists (2) Outs – you can Output to any Channel from any other, externally or internally, so long as your mixer allows you to select Audio Output Channels. So for me, whether working in Ableton Live, or another DAW  – I just select the StudioMux Audio Interface as Input, and then map my Active Channels to Live’s mixer. If you want to get maximal audio possibilities, I recommend LoopBack Audio from Rogue Amoeba. It’s a terrific way to set up a Virtual StudioMux Mixer. I won’t get into all the aspects of LoopBack here, but the idea is to map StudioMux’s Mixer to whichever Audio I/O’s you want to use – multiple Computers, Applications, Recorders, Monitoring Channels, FX, Channel Strips, and Play-Thru devices are all easy to set up with LoopBack.

Whether you’ve got several iPads, Windows Computers, or Mac’s – Studiomux is the most robust tool in the audio producer’s arsenal for handling Audio & MIDI. In fact, if you’re willing to take a bit of time, there’s no reason you can’t have a very affordable, and low-latency solution for Audio & MIDI Routing. I personally took it up because I wanted to utilize the processing power I had lying around the house, so I could get more audio channels, instances of software running, storage space, and redundancy. Of course, you’ll be working within the limitations of your computer specs, but there are otherwise cost-saving advantages to be had, or maybe there’s a plugin only available on Windows, and you want to process your iOS audio though it – you get the idea.

Once you’ve configured the Studiomux server, there’s really not much else to be done. You can use the VST or AU’s for routing, or set the Audio Device enumerated by the Studiomux connection to send and receive Audio. The routing options are fantastic at this point! You can route multiple generators, FX, Instruments, MIDI to and fro all your devices.

While IDAM has been expanded in MacOS High Sierra to include great new MIDI features, there aren’t any changes resultant from High Sierra or iOS ’11 that will affect Studiomux’ functionality, or platform value. While IDAM now enumerates the iOS device as a Class Compliant MIDI Device, along with 16 bi-directional MIDI channels, it also continues to disenable Quicktime’s screen recording function, which when IDAM isn’t enabled is a great tool for recording iOS screens and Audio back on the Mac. However, you can enable IDAM and still utilize StudioMux, by aggregating the Studiomux and IDAM-enabled iOS device. In this way you can still utilize the features of IDAM, but with the more robust bi-directional audio Studiomux offers. IDAM audio is one way from iOS to Mac, and is only a single Stereo channel at 48khz (32 bit floating point isochronous USB Audio). But if IDAM isn’t necessary for you, or screen and audio recording via Quicktime or Screenflow is, then Studiomux is more robust than IDAM, and works across platforms. Built in MacOS tools like the Network Session and IAC Driver bus, coupled with the MIDI tools I mentioned above, are enough for as many MIDI Channels and routing as you’ll need, wireless or over ethernet.

Together, the features of Studiomux, along with some system-specific (and free) utilities, you can be up and running audio and MIDI between your devices. While there are some other protocols and routing tools that may be useful to your particular situation, I believe Studiomux currently offers the most robust set of features at the lowest price point.