This morning I woke up and had the random thought to try out the PlayStation Wireless Stereo Headset with the iPad, and see what would happen. I’ve had this headset around for a few years. I don’t get much chance to use the PS3 these days, and even less so this headset. Prior to Apple’s release of the Camera Connection Kit 3, there was no option plugin a headset like the PS3’s, as it requires a USB dongle. And there was no guarantee the headset would work either, not everything is recognized and functions via the CCK.
However, in this case I plugged in the power connection to the CCK, then the Dongle, then plugged the CCK into the iPad (Standard order of plugging out for the CCK). You always need to make sure there’s 2.4 amp power, then plugin the device, then finally plugging the CCK into the iPad where the device is adequately powered to be recognized and function.

So of course, the immediate utility of being able to listen to the headphones via the iPad is great. If you have a set, you’ve got a nice addition to your headphone collection. 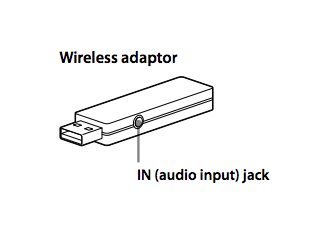 But this headset also has a few features audiophiles and producers will appreciate. The first is the USB Dongle, if you look closely, it’s got a 3.5mm Audio Jack! This allows you to output from any audio source into the PS3 Headset’s adaptor, and then m

onitor that audio wirelessly with the headphones. The USB Audio source (in our case the iPad) will be disabled when the 3.5mm jack is engaged.

On the Headset, there’s another 3.5mm Audio Jack. This can be used to monitor any audio source, or can be plugged directly to the USB Adaptor for a wired connection. The audio quality from the headset is 24 bit 48khz. It’s also got built-in ability to monitor the microphone channel. You can record in the microphone audio as well, and with the PS3 control the amount of volume sent to the voice and audio channels, independently. I think as a broadcast tool, it’s solid. You can actually put together several sources of audio. So if you happen to have this headset around, hook it up to the CCK for a good interface, monitor, or recording device for your voice overs.

With a 3.5mm to TRS or Dual RCA’s you can plug your interface or any audio source into the Headset’s USB Adaptor, and then monitor that output wirelessly in the headset.

And as I mentioned above, you can also plug an audio source directly to the headset’s 3.5mm I/O.

And of course, you can also just listen to your music via the adaptor.

All these features and a solid microphone make this headset a decent interface. I’ve always found it a comfortable fit, and like the sound. It’s got about 7 presets for various movie types, and a bunch of other features I’ve not even covered here, and I’m excited to bring it back to use here.