As I’ve been in the process of converting my studio over to an all ethernet Audio, MIDI & Video setup I picked up 2 of these Aukey USB Hubs. Along with the nominal benefits of USB 3.0 these hubs also improve on the current dongle insanity necessary to get a wired ethernet connection from iOS to the Mac. The best way I’ve known to accomplish this connection thus far is by connection the USB 3.0 Camera Connection cable to the i-device, into both a 2.4 power source, and then to the Apple USB-to-Ethernet adapter, into the Apple Thunderbolt-to-ethernet adapter, which finally makes the connection. I found out about this technique from an April 2016 Cult of Mac Article by Rob Lefebvre:

When Wi-Fi is out, use Ethernet to get online with your iPad 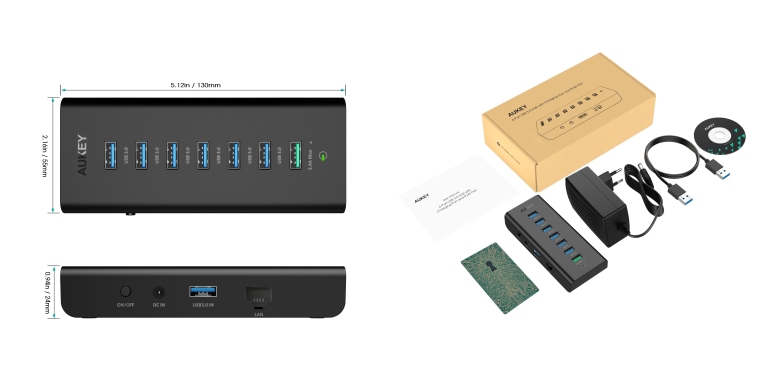 But with this Hub, you’ll just need the CCK – Powering it from the 2.4 port on the Aukey Hub, while connection the Apple Lightning-to-USB cable to one of the 6 USB 3.0 ports on the Aukey Hub.

Now you just utilize the Ethernet Jack on the Aukey Hub – plugging it out to your main gateway device (wireless router, cable modem, switch). Having made the connections as such you can navigate to Network Settings on the Mac – where you should see iPad USB Device listed. And since iOS 10.3 ethernet connections are also enumerated in Settings on the i-device, where you’ll be able to view basic information about the ethernet configuration from there, and potentially take advantage of new automation features like tethered-caching, Workflow, and other features.

Obviously the big benefits here are the reductions in costs for dongles (not to mention it’s not exactly easy on the eyes), and associated clutter. If you happen to have an iPAD Pro 12.9 you’ll also be able to utilize the USB 3.0 pipe, along with Gigabit ethernet speeds (or at least not be limited by the 10/100 speed of the Apple USB-to-Ethernet adapter.

The Aukey Hubs Utilize their USB 3.0 In Port to plug out to the Host Computer. MIDI Devices plugged into the HUB will enumerate as normal in the Audio/MIDI Setup. The Aukey Hub will also send MIDI over ethernet – though on the ethernet channel the MIDI Devices aren’t shown as Senders. You can, however, clean this issue up by creating MIDI Device Aliases for all your MIDI Devices in Audio MIDI Setup. You’ll want to create those devices with the proper identifiers. The alias ports will work as sender/receivers for the devices on the ethernet pipe, ensuring MIDI data is routed to the proper endpoints. Again, this is primarily practical if you’re using ethernet for MIDI, or daisy-chaining the Aukey Hubs.

Dongles work as well as Network Storage Devices – so if you have storage medium it will show up as a Network Storage location, which is also handy for Sample Storage, DCIM folders, and the like.

The Hub does Not work with HID devices, so no printers or mice.

Overall – I’ve found these Hubs to provide quite a bit in a small form factor, and at a good price point. 6 ports of USB 3.0, Gigabit Ethernet, and 2.4 Charging is a solid feature set. I almost neglected to mention that the other ports do provide the 500ma power, which will keep the power discharge of iPads and the like, to a minimum.